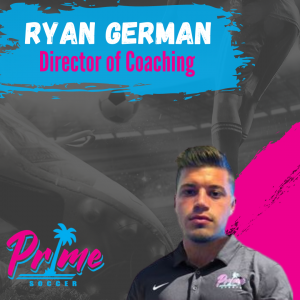 Ryan comes to Florida Prime Soccer with a wealth of knowledge and experience across all levels of Soccer. His professionalism, high standards and unrivaled work ethic sets him apart from others and quickly translates to players and colleagues alike. After working with former premier league and international players, he went on to become one of the youngest Head Coaches at the semi professional level in England and also held positions within a professional youth academy. After relocating across the pond, Ryan has held Director of Coaching positions at both his former clubs; most recently at Juventus Academy Boston, where he assisted in launching the club and oversaw the following areas, as well as many more: coach education, player development, the academies philosophy & style of play, and led multiple modern programs within the academy which helped bring data-driven evaluations to all players within the club. He has also coached teams who’ve made Regional and National Finals, as well as helped players receive European professional tryout offers.

Ryan believes in developing all athletes as players and people, ensuring that they reach their individual potential on and off the field. With a degree in Sports Management and experience in building and growing ‘development first’ academies, he puts great emphasis on developing everyone within an organization to ensure the long term success of creating the modern player with a winning mindset.